You need tologinorregisterto add to your favorites.

Helping build our children’s immune system is at the core of every parent’s nutritional choices. Understanding how immunity works and, particularly, the key role of Human Milk Oligosaccharides is a good way to start…

Helping build our children’s immune system is at the core of every parent’s nutritional choices. Understanding how immunity works and, particularly, the key role of Human Milk Oligosaccharides is a good way to start.

The recent discovery of HM-Os’ contribution to human milk immune properties was, in itself, a great scientific breakthrough. However, the ability to synthesize and introduce HM-Os in milk is now opening a whole new world of possibilities for our children’s health.

HM-O: A nutrient with incredible properties

Synthesized by the mammary gland, HM-Os are the third largest solid component in human milk after lactose and lipids. They serve as food for probiotics (friendly bacteria) and support them and other microorganisms in the gut. Around 160 different HM-Os have been identified so far, with 2’FL and LNnT being two of the most predominant ones.

Are oligosaccharides specific to human milk?

They are not: actually, some oligosaccharides, like GOS and FOS, are of animal origin and of plant origin (derived from chicory root), respectively, but are structurally different from HM-Os

HM-Os, as their name suggests, are mainly found in human milk. Some of them, however, such as 2’FL, 3’SL, 6’SL, can also be found in animal milks (e.g. cow’s milk, goat’s milk) but at a much lower level.

On the other hand, 3’GL, which is a GOS, can also be found in human milk (at trace level).

To date, 2’FL and LNnT are the only 2 HMOs (in combination) that have been clinically shown to support an infant’s immune health.

For gut microbiota, HM-Os act as a substrate with powerful and selective action: it helps beneficial bacteria such as bifidobacteria to thrive, while limiting the growth of potentially pathogenic strains of Enterobacteriaceae, Escherichia coli and Clostridia. 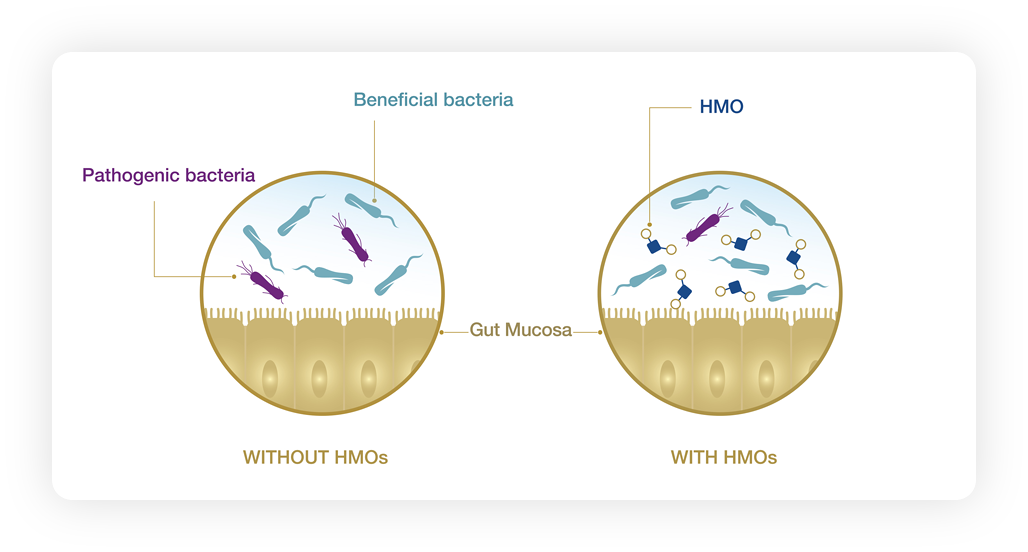 To cause an infectious disease, pathogens need to adhere to the gut mucosa. HM-Os can directly interact with intestinal surface cells and modulate their shape (or glycan expression) in a way that prevents the attachment of potential pathogens and enhances their clearance in stools. 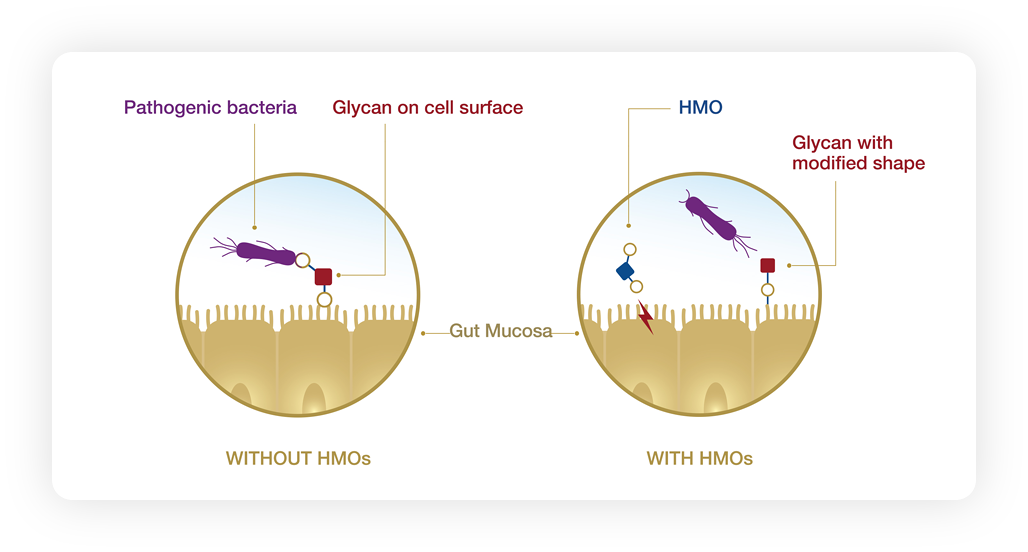 HM-Os, especially fucosylated HM-Os such as 2’FL, resemble gut cell surface glycans and serve as decoy receptors, keeping pathogens away from the mucosa, thus reducing their ability to infect the child. Immune cells in child’s microbiota are called T cells and are one of two types: Th1 or Th2. The child’s innate immune system is highly unbalanced towards Th2 response, favoring allergic reactions. HM-Os can exert microbiota-independent immune effects that will help promote a shift towards a balanced Th1/Th2 response and drive immune maturation. 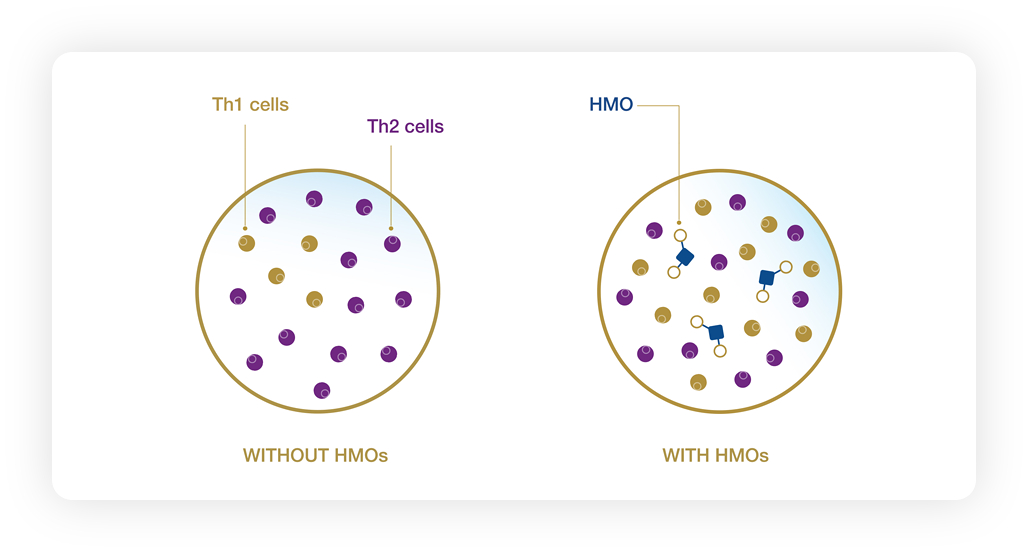 2’FL & LNnT: An amazing HM-O combination to include in formula

2’FL and LNnT are the only HM-Os that have been clinically shown, in a first Nestlé clinical study, to strengthen child’s immunity(1): 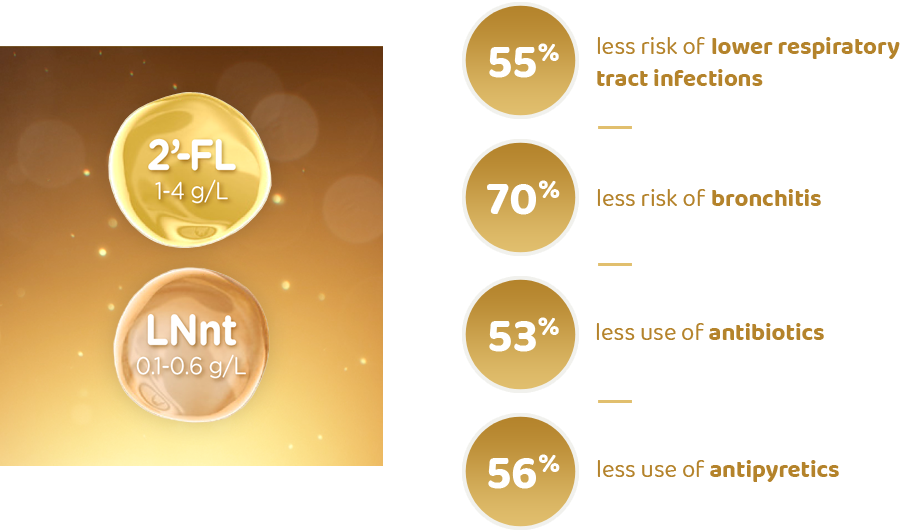 53% less use of antibiotics

56% less use of antipyretics or anti-fever medicine

Moreover, the formula with 2’FL and LNnT was clinically shown to help the development of the gut microbiota towards a more beneficial composition (more bifidobacteria, limited growth of some pathogens), compared to children who were given milk without HM-O.

These two specific HM-Os are now included as an immunity support at the heart of a highly innovative formula. This is the first time in history that a milk with HM-Os has been able to show immune benefits for a child.

SOME IMPORTANT INFORMATION BEFORE YOU CONTINUE

We believe that breastfeeding is the ideal nutritional start for babies and we fully support the World Health Organization’s recommendation of exclusive breastfeeding for the first six months of life.
We also recognize that breastfeeding is not always an option for parents. No matter your feeding choice, Nestlé Mom & me is here to share the latest evidence-based information to ensure you feel supported and confident that you are giving your baby the best possible nutrition.